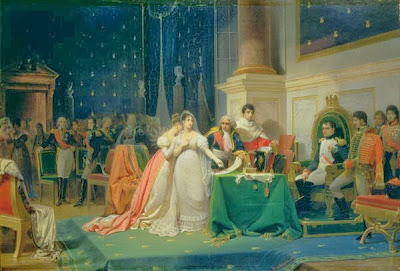 This month, in 1810, Napoleon divorced his first wife, and the love of his life, Josephine. Napoleon had met the recently widowed Josephine in September 1795 and had been instantly smitten with her. The following March they had tied the knot, but their marriage had been stormy from the start. Soon, it had become clear that Josephine didn’t love her husband as much as he loved her, and they both started affairs with other people. Jopsehine was also hated by her husband’s family and the many long months at a time Napoleon spent away fighting certainly didn’t help either.

And yet, Napoleon and Josephine still loved and respected each other and had so been able to stay together and overcome all their difficulties. But there was one problem that couldn’t be solved. Josephine had been unable to give Napoleon, now Emperor of the French and desperate for an heir to succeed him on the throne, a son. Now, at 46, it was painfully obvious that she never would. Therefore, Napoleon decided that Josephine had to go. 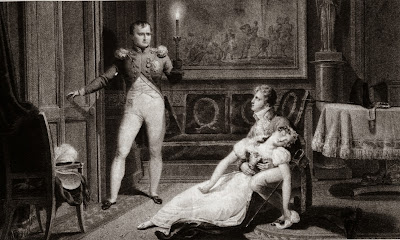 It mustn’t have been an easy decision for him, and yet, as he appeared to be grieving for the inevitable end of his marriage, he was already looking around for a new, royal, and fertile young bride. His choice would fall on the Austrian archduchess Marie-Louise, a niece of Marie Antoinette. But that’s still in the future. First, Napoleon had to obtain a divorce.

On 15 December 1809, the couple announced their decision to end their marriage. Napoleon gave a speech in which he explained how much this had cost him and that he still cared for Josephine:

“God knows what such a decision has cost to my heart! But there is no sacrifice that is beyond my courage if it is shown to be for the good of France. I must add that, far from having any reason for reproach, I have nothing but praise for the attachment and the affection of my beloved wife: she has graced fifteen years of my life; the memory of them will remain engraved in my heart. She was crowned by my hand; I desire that she retain the rank and title of crowned empress, but more than this, that she never doubt my feelings and that she value me as her best and dearest friend.” 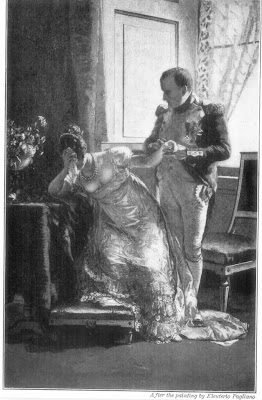 Next, it was Josephine’s turn. Her speech was very moving, but her tears prevented her from finishing it:

“With our most august and dear husband’s permission, I must declare that no longer holding out any hope for a child that could satisfy both his political needs and the good of France, I give to him the greatest proof of attachment and devotion that has ever been given on this earth. Everything I have comes from his greatness; it is his hand that crowned me, and up on this throne, I have received evidence of nothing but affection and love from the French people.

I acknowledge these feelings in agreeing to the dissolution of this marriage, which from this moment on is an obstruction to the well-being of France, depriving it from the joy of one day being governed by the descendants of a great man clearly chosen by Providence to eradicate the evils of a terrible revolution and re-establish the altar, the throne and social order. Nevertheless, the dissolution of my marriage will change nothing of the feelings in my heart: the Emperor will have in me always his greatest friend. I know how much this act, called for by politics and greater interests, has pained his heart; but glorious is the sacrifice that he and I make for the good of our nation.” 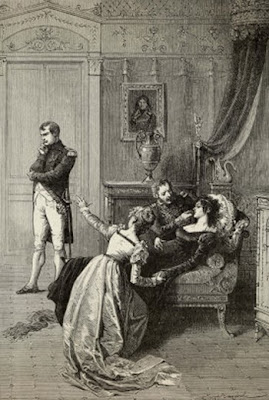 The following January, the distraught Josephine and the distressed Napoleon signed the official documents, in front of the court. It was a heavy blow for Josephine. That night, she went to her now ex-husband’s room where they both cried and mourned the end of their marriage, which had lasted over 13 years. The next day, Josephine left for her residence, the chateau of Mailmaison. Before her departure, Napoleon, bringing with him his secretary Meneval, went to say goodbye to his ex-wife.

Once again, Josephine was overcome by her distress and, crying, threw herself in his arms, where she fainted. Napoleon, distraught and embarrassed, kissed her goodbye before handing her carefully to her secretary and quickly leaving the room. The emperor, however, was unable to separate himself from Josephine completely, and the couple remained friends for the rest of their lives. It is said that when he died, his last word was “Josephine”. Hers was “Napoleon”.