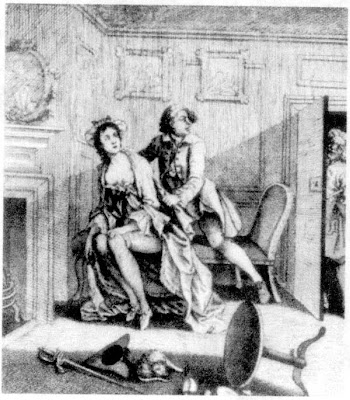 From The Rambler’s Magazine of 1823, the story of a duchess who cheats on her husband with her footman and, eventually, settles down with him..

THE DUKE SUPERSEDED BY HIS SERVANT

A celebrated duchess long renowned for her meanness at home, and her husband’s arrogance abroad, has at length reached the final point of female disgrace; she has “fallen from her estate,” and fallen “like Lucifer never to hope again.” We could have mentioned this in our last, but we are never first to condemn a woman, we never wish to lay a hand upon them but in kindness, and with our pen would rather extenuate their failings, than set down aught in malice. The husband of this “stricken deer,” holds a sinecure office in London of immense emolument, and he resides abroad as governor of a West Island, where he is famous for annual quarrels with the legislative assembly, he also makes up for the loss of his fair rib’s society by substituting black beauties in her place.

The lady retaliated, as she could not have the master, took the man, who no doubt felt it his duty to obey his mistress in every thing with spirit and alacrity. The lady was at one time so stingy in her nature, that she actually, when she returned from court, made her footmen pull off their silk stockings and send them up to her, when she carefully folded them in a drawer, and made them serve again without washing. She also kept the key of the pastry larder, lest they should use her flour for hair powder; it is presumed that he who had got a key to admit him into the secret recesses of her grace’s thoughts, was not locked out from such trifling luxuries. The man that is once locked in a woman’s arms, will find every bolt and bar fly open at his approach, as if by magic.

He that has got the key of her heart and conscience, will find it open, – her purse – her bed-chamber – her wine cellar – in fact every thing but her eyes, which it is to his interest to keep shut. […] Affection may subsist betwixt parties, though the Atlantic ocean divides their persons – a letter can

“Waft a sigh from indus, to the pole”

but practical proofs of love which either sex require, are rendered impossibilities. The duke heard, that his tired spouse had resorted to her servant for those duties, he had it not in his power to bestow, and he came home breathing out threatanings and slaughter; but the blood of the Gordons was up and ready to repel the heavy charge he had preferred. Her grace made no attempt at concealment […] Whilst she admitted having committed adultery with her husband’s servant, she taxed that husband with having committed incest with his wife’s sister; and he shrunk from the charge – simple fornication, or double adultery, was not to be compared to this revolting crime – a judge and a jury was not to be faced on the occasion, and a private arrangement was made between the guilty parties, in which the interest of the footman was well considered. In case of a separation by an Ecclesiastical court, the parties would have had to give bond for remaining in a stale of continence, which both would have been sure to break, and her graces’s open confession at first, was meant more for the good of her body than her soul, as her aim was to live incontinently with the object of her love.

Three thousand pounds per annum was settled upon her grace, and she has settled with her footman in an elegant cottage near London, where she has taken his name, and sunk the honors and title of a duchess in the humble name and brawny arms of her fortunate domestic. We are not of those who think real happiness consists in titles and honors, none can blame this lady severely, when we reflect, that for years she never saw her husband’s face, so that she was only nominally a wife. […]