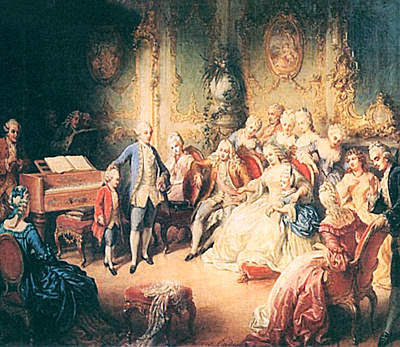 In 1762, Mozart went to the Austrian court, where he meet the royal family, including Marie Antoinette, and played for them. The story of Mozart proposing to the young archduchess is just a legend, but the little child prodigy did get a kiss from the Empress. Here’s how Antonia Fraser recollects the visit in her book Marie Antoinette: The Journey:

On 13 October 1762 “the little child from Salzburg”—Wolfgang Amadeus Mozart—came with his father and sister Nannerl to Schönbrunn. He played the harpsichord in the presence of the Empress, the Emperor, the court composer Georg Christoph Wagenseil and various of Maria Teresa’s offspring, including Antoine who was three months older than the prodigy. The child played “marvellously,” was the verdict, and he was rewarded with an honorarium of 100 ducats and presents from other nobles. He was also presented with a fine outfit that had belonged to the Archduke Max, a coat of lilac colour and a moiré waistcoat, all trimmed with gold braid. The concert was repeated, again at Schönbrunn, a week later.

Perhaps it is not true that the young Mozart flung himself at the young Marie Antoinette and declared that he would marry her when he grew up (an apocryphal story which, if it had in some amazing way come true, would certainly have altered the course of history). But his impetuosity was certainly in evidence; Antoine was present when he rushed up to the Empress and jumped on her lap, receiving a kiss in return. Mozart also responded to the Emperor’s teasing by accurately playing with one finger on a covered keyboard, and showed his own playfulness by demanding that Wagenseil should turn over his music for him, as he played the court composer’s own work. Shortly afterwards Mozart travelled on to France, where the French King’s daughter Madame Victoire became his patron, receiving a dedication of some piano sonatas in return. The Marquise de Pompadour was, however, less welcoming. “Who is this that will not kiss me?” enquired the “little Orpheus” of the haughty mistress: “The Empress kissed me.”