English artist William Hogarth was a patriotic man who deeply disliked France. He showed his feelings about the two rival countries in two prints entitled “The Invasion; Or, France And England”. Let’s take a close look at them, shall we? Oh, and don’t forget to click on the pictures to enlarge them. 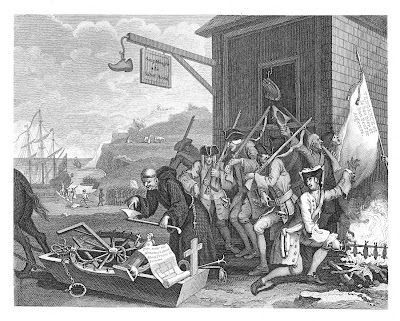 With lantern jaws and croaking gut,
See how the half-star’d Frenchmen strut,
And call us English dogs:
But soon we’ll teach these bragging foes
That beef and beer give heavier blows
Than soup and roasted frogs.

The priests, inflam’d with righteous hopes,
Prepare their axes, wheels, and ropes,
To bend the stiff-neck’d sinner;
But should they sink in coming over,
Old Nick may fish ‘twixt France and Dover,
And catch a glorious dinner.

This print shows a bunch of French soldiers embarking to conquer England. The soldiers look very thin and gaunt. The lack of food for the army is inferred by the bare bones of beef hung up in the window and the inscription on the alehouse sign, “Soup maigre au Sabot Royal”. Because of this, a soldier, to eat, is forced to roast four frogs impaled upon his sword. To encourage their spirits to action, the motto on the standard says “Vengeance, avec la bonne Bière, et bon bœuf d’Angleterre.” The Church, represented by the friar, isn’t sharing in the hardships of the army. The friar, who is examining an axe with which to kill the protestant English, is portly and in good health.

On a sledge, in front of him, are laid several instruments of torture, which were used by the church to estirpate heresy and spread the Catholic religion, a religion that preaches mercy, charity, meekness and forbearance. Also on the sledge there are a plan for the construction of a monastery at Black Friars and a statue of St.Anthony, the patron of animals, with a pig. In the background, we see a group of soldiers who are so averse to this expedition, that they have to be forced to board the ship by their sergeant. Finally, two women are ploughing a sterile field, a job they are forced to do because every man in the country has been called to war, making agriculture, and thus the economy, suffer. 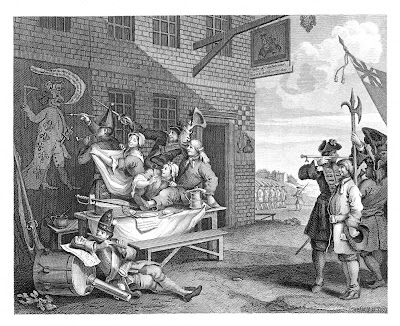 See John the Soldier, Jack the Tar,
With sword and pistol arm’d for war,
Should Mounseer dare come here;
The hungry slaves have smelt our food,
They long to taste our flesh and blood,
Old England’s beef and beer.

Britons to arms! and let ’em come,
Be you but Britons still, strike home,
And, lion-like, attack ’em,
No power can stand the deadly stroke
That’s given from hands and hearts of oak,
With Liberty to back ’em.

If the French are hungry and forlorn, the English are well-fed and in good spirits, busy making preparations to defend their country from the upcoming invasion. On the right, we see a farmer who’s so desirous to enlist that he stands on his tiptoes to reach the stick the halberd is holding. Anyone shorter than the indicated height will, in fact, be rejected. In the meantime, an artist is making a caricature of the French monarch, the most Christian King. Holding a sword in one hand and a gibbet in the other, the King is saying:”You take a my fine ships; you be de pirate; you be de teef: me send my grand armies, and hang you all.”

The crowd around the artist approves and loves his work. In the left hand corner, a fifer is playing the patriotic tune, “God Save The King”. In the background, we see a sergeant teaching manual exercise to a company of recruits. This military meeting is held at the sign of the Gallant Duke of Cumberland, who is riding a horse. The sign also says “Roast and Boiled every day,” which creates a starking contrast with the meager food given to the French troops. The English are also given liquor, as it is indicated by the image on the wall of the building.

Further reading:
The Works of William Hogarth by John Trusler