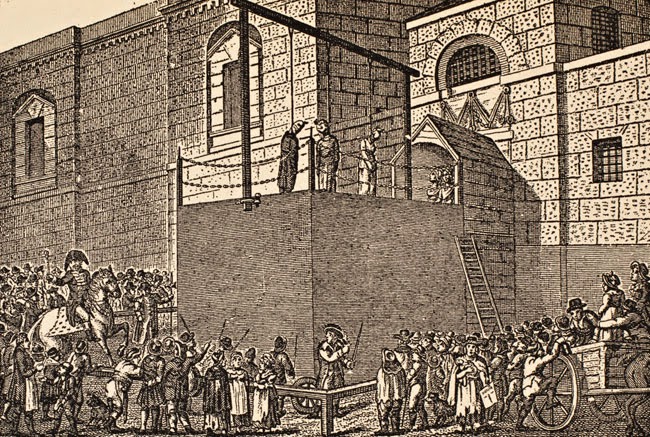 Lord William Russell, a member of Parliament, was murdered in his sleep. His body was found by his maid on 6th April 1840. The initial signs pointed to a robbery, as Viscount Melbourne explained in this short letter to Queen Victoria:

Lord Melbourne presents his humble duty to your Majesty. He has just received this from Lord John Russell—a most shocking event, which your Majesty has probably by this time heard of. The persons who did it came for the purpose of robbing the house; they entered by the back of the house and went out at the front door. The servants in the house, only a man and a maid, never heard anything, and the maid, when she came down to her master’s door in the morning, found the horrid deed perpetrated….

The police was called and soon the investigation pointed in a new direction. The murderer had staged the robbery to cover his tracks. He was a member of the household. Viscount Melbourne updated Victoria on this new twist in the investigation in another letter that same day:

Lord Melbourne presents his humble duty to your Majesty. Since he wrote to your Majesty, he has seen Mr Fox Maule [Under-Secretary for Home Affairs] who had been at the house in Norfolk Street. He says that it is a most mysterious affair. Lord William Russell was found in his bed, quite dead, cold and stiff, showing that the act had been perpetrated some time. The bed was of course deluged with blood, but there were no marks of blood in any other part of the room; so that he had been killed in his bed and by one blow, upon the throat, which had nearly divided his head from his body. The back door of the house was broken open, but there were no traces of persons having approached the door from without. His writing-desk was also broken open and the money taken out, but otherwise little or nothing had been taken away. The police upon duty in the streets had neither heard nor seen anything during the night. In these circumstances strong suspicion lights upon the persons in the house, two maids and a man, the latter a foreigner and who had only been with Lord William about five weeks. These persons are now separately confined, and the Commissioners of Police are actively employed in enquiring into the affair. An inquest will of course be held upon the body without delay.

The murderer was indeed the foreign valet, François Benjamin Courvoisier. Lord Russell had discovered his valet was stealing his silverware and ordered him to resign from the household. Instead, Courvoisier murdered Lord Russell to conceal his thefts. It didn’t work.

The police started suspecting Courvoisier when they found some of the money and gold and silver articles that were supposed to have been stolen during the robbery wrapped in a parcel inside the house. Some were hidden in Courvoisier’s pantry. In addition, a screwdriver found in Courvoisier’s possession was found to match the marks on the pantry door and the silverware drawer. Still, the evidence wasn’t enough to prove his guilt.

Only when his previous thefts had been discovered as well, and some of those items located at a French hotel in Leicester Square, he confessed his guilt to his lawyer, Philips. But he still plead not guilty in court and tried to blame the maid for his crimes. Philips was forced to obey his client’s directives and was fiercely criticized for it.

Courvoisier was found guilty and publicly hanged outside Newgate Prison on 6 July 1840. Apparently, among the audience were writers Charles Dickens and William Makepeace Thackeray, who later said: “I feel myself shamed and degraded at the brutal curiosity that took me to that spot.”