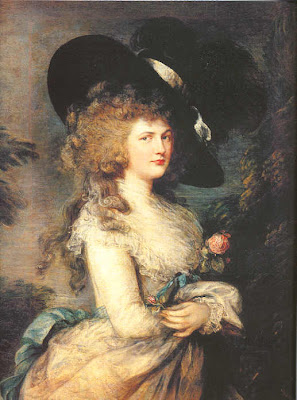 He [The Duke] provoked more gossip when he turned up four hours late for his presentation at court with Georgiana. All newly married couples were required to present themselves to the Queen at one of her twice-weekly public audiences at St James’s Palace, known as “Drawing Rooms”. The Drawing-room was fuller than ever I saw it, ” a witness recorded, “excepting that of a birthday [of the King or Queen], owing, as I suppose, to the curiosity to see the Duchess of Devonshire.” Georgiana was wearing her wedding dress and “look’d very pretty… happiness was never more marked in a countenance than hers. She was properly fine for the time of year, and her diamonds are very magnificent.” The formidable Lady Mary Coke wondered why the Duke ambled in on his own several hours after Georgiana. He “had very near been too late; it was nearly four o’clock when he came into the Drawing Room.” She watched him for some time and noticed that he showed no emotion. “His Grace is as happy as his Duchess,” she decided charitably, “but his countenance does not mark it so strongly.” Lady Mary’s opinion might have been different had she known about Lady Spencer’s* frantic messages to the Duke, imploring him not to be late.