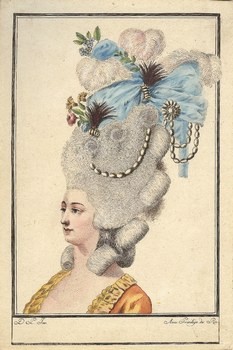 Fashions changed very quickly in eighteenth century France, and were one more extravagant than the other. No matter how ridiculous or uncomfortable these trends were, women would rush to their milliners and spend a fortune to always look “fashionable”. One of the most extravagant hairstyles was The Pouf Aux Sentiments, which replaced the simpler Ques Aco:

The winter of 1774 was approaching its end, when a new fashion of hairdress made its appearance, and was baptized the Ques aco. “It consisted of a panache in plumes, which the elegant ladies wore at the back of their heads.” The name Ques aco is supposed to have been taken from a memoire by Beaumarchais, directed against a certain Marin, whom the author had ridiculized. The memoire of Beaumarchais had an enormous success, and the expression of Ques aco became very popular.

Marie-Antoinette had taken an interest in this event, the name of Beaumarchais being mentioned at Court very often, and she had asked for an explanation of the Provencial expression. When she understood it, she frequently happened to make use of it. Among her intimates, Rose Bertin, who was always au courant of big and little events, always in search of new ideas and new creations, and names by which to baptize the latter, was quick enough to make use of the incident, and soon imagined a new hairdress known as the Ques aco. Generally speaking, everything relating to fashion is of ephemeral character, but the headgears of those days were prodigiously so.

A month after the introduction of the Ques aco a new invention took its place; it was the famous pouf aux sentiments. “The pouf aux sentiments,” writes the continuator of Bachaumont on April 26, 1774, “is a new hairdress which has succeeded the Ques aco, and is infinitely superior to the former, on account of the numerous things which were required for its composition, and the genius employed to vary it artistically. It is called pouf on account of the numerous objects which it can contain, and aux sentiments because these objects must have a certain relation to what one loves best, and express one’s preferences. Every woman is madly anxious to have a pouf.” 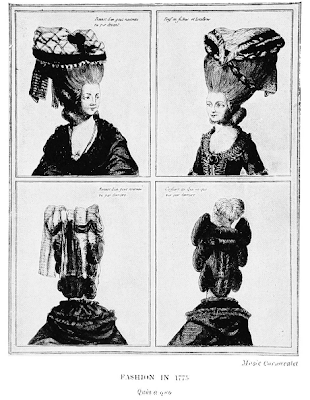 Leonard Antid is supposed to have excelled in the art of placing poufs of gauze, which were introduced between the locks, and one day he employed for that purpose about 14 yards of gauze for one hairdress. But all these poufs differed greatly from the pouf aux sentiments owing to their simplicity; they also required no assistance from the milliner. The pouf aux sentiments could contain such various objects as fruit, flowers, vegetables, stuffed birds, dolls, and many other things giving expression to the tastes, the preferences, and the sentiments, of the wearer.

The continuator of the memoires of Bachaumont has left us a description of a pouf aux sentiments worn by the Duchesse de Chartres: “In the background was the image of a woman carrying an infant in arms; it referred to the Duc de Valois and his nurse. To the right was a parrot picking a cherry; the parrot was the Duchess’s pet bird. To the left was a little nigger — the image of him whom she loved very much. All this was ornamented with locks from the hair of the Duc de Chartres, the husband, the Due de Penthievre, the father, and the Duc d’ Orleans, the father-in-law, of the lady.” […]

Another famous pouf was that of the Duchesse de Lauzun. The Duchesse one day appeared at a reception of the Marquise du Deffant’s wearing a most delicious pouf. It contained a stormy sea, ducks swimming near the shore, someone on the point of
shooting one of them; on the top of the head there was a mill, the miller’s wife being made love to by an abbé whilst near the ear the miller could be seen leading a donkey. […]

The death of the King put an end to the pouf aux sentiments. “The mourning for the King,” writes the Baroness d’Oberkirch in her memoirs, “put an end to a very ridiculous fashion which usurped the place of the Ques aco. This was the pouf aux sentiments. It was a head-dress into which may be introduced the likeness of any person or thing for which one may feel affection, such as a miniature of one’s daughter or mother, a picture of a canary or a dog, etc., adorned with the hair of a father or of a beloved friend. It was a most incredible piece of extravagance. We were determined to follow the fashion, and the Princess Dorothea once amused herself for an entire day by wearing on her ear the picture of a woman holding a bunch of keys, and which, she declared, was Mme. Hendel. The femme de charge thought it a striking likeness, and was almost out of her senses with pride and joy”. This Mme. Hendel was femme de charge of Princess Dorothea at the Castle of Montbeliard. […]

Further reading:
Rose Bertin, the creator of fashion at the court of Marie-Antoinette by Laglande and Rappaport