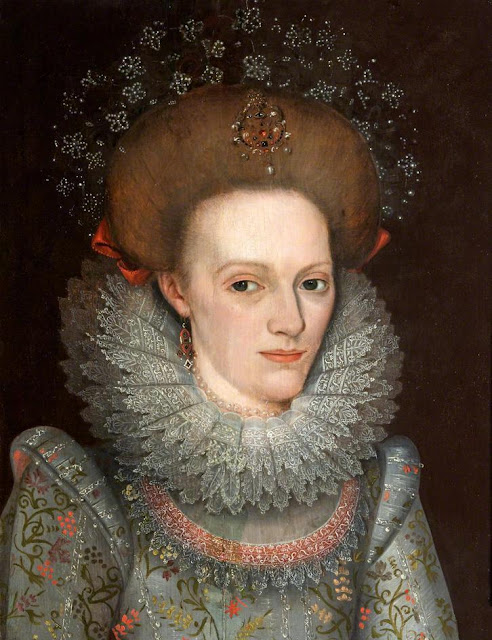 In late 1591, Elizabeth Knollys, a descendant of the Boleyns, and her husband, professional soldier Sir Thomas Leighton, welcomed a daughter into the world and their family. They named her Anne, and gave her an education befitting her status. The girl was taught sewing, housekeeping, and all the skills needed to manage a Tudor household. She also shared a tutor with her brother. William Bradshaw was a Puritan preacher, with uncompromising beliefs that courted controversy.

Her childhood was spent between Hanbury, in Worcestershire, where the Leightons had their family seat, and Guernsey, where her father acted as Governor. But one day, she would have to leave both, and move to her husband’s place. Her father arranged her a match with John St Jones, the younger brother to the heir to the St Jones’ fortune. When both his parents died, he was made a ward of Sir Thomas by Queen Elizabeth I.

In the end, John got both the girl and the money. In 1597, while on holiday with Sir Thomas, his elder brother drowned. Aged only 11, John inherited his family’s lands and fortune. A few years later, in 1604, he married the 13 year old Anne at St. john’s Church, in Hackney. Soon afterwards, the couple set up home at Lydiard House, which they soon filled with children.

While Anne took care of their growing family, John was busy rising up at court. In February 1609, the new King, James I knighted him at Whitehall. These were prosperous and happy years for the family. Things would change once the civil war broke out, with three of Anne’s children dying in the royalist cause. But she never knew it. Anne died before the country was brought into turmoil. The inscription on her tomb reads:

“Anne was the daughter of Thomas Leighton, Knight, by his wife Elizabeth of the Knowles family and of the kindred of Queen Elizabeth, as blessed in character as in connection. She lived for thirty seven years, endowed with noble gifts of mind, body, and manner, a rare example of virtue and piety; she was the mother of thirteen surviving children; in the end, long worn down by the painful agonies of her last confinement and at last overcome, she fled to heaven on the 19th September, 1638.”