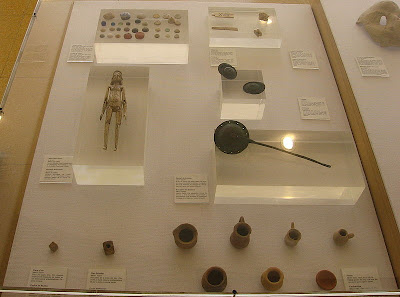 Have you ever wondered what toys the Ancient Romans had and what games they played? Surprisingly (or maybe not), they are pretty similar to the ones we play with nowadays. Of course, there were no video games, the choice of materials was limited and most children didn’t have a lot of toys to play with (only wealthy children could afford a lot of toys, and they were made with more precious materials), but that simply meant that they had to use their imagination more. But just like today, their games and toys were based on real life activities and mimicked the situations they would find themselves in one day.

Little girls played with dolls, which were made from wood, rags, wax, ivory and terracotta. Some of them even had moveable arms and legs. In addition, they usually had the hairdo that was popular at the time of their fabrication, which makes it easier for archaeologist to determine in which period the dolls were made. Little boys, instead, played with wooden swords and sticks, pretending to be soldiers. One war game was called Troy, from the famous ancient battle, and was played by two teams of children. A large group of boys would have to try and pull the others, who were fighting back, across a line. Boys and girls also played with small figurines of people and animals made from wood, spinning tops set in motion by a small rope, swings, kites, marbles (although they used nuts as marbles), and wooden hoops with bells on them that would be rolled along the streets. 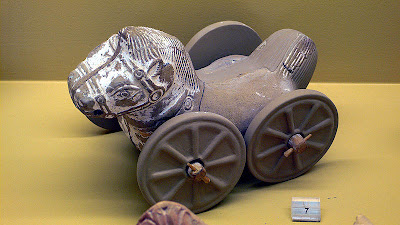 Hide-and-seek and blind man’s buff were already popular games back then too. And so were ball games. One of them was called pilae. Several versions of this game existed but all of them involved hitting a ball with either the arms or hands, which were usually padded for protection. Children played board games too. One of them was called rages. Although we don’t know exactly how it worked, we know it was a word game involving several rows of letters and is thought to be an ancient version of Scrabble. The ancient Roman always played a game very similar to chess. It was called latrunculi (derived from the Latin word latrus meaning servant or soldier) and was played with a board divided into squares and small pieces called latrunculi or calculi made with wood, stone or even wax. The aim of the game was to capture the other players’ latrunculi.

But what about adults? What games did they play? A game that dates back to ancient Roman times, and which was played by adults too, is morra or, as it was called at the time, micatio. We know the rules. All the players throw out a hand showing only several fingers at the time, while calling out their guess at what the sum of all fingers shown will be. An ancient version of Odds and Evens also existed: a player had to guess how many stones the other was holding in his/her hand. Gambling, although illegal, was widespread. It was usually played in taverns, behind a curtain. Cards hadn’t been invented yet so the Romans played with dices called tesserae and, at the gaming tables, fabulous fortunes were quickly dilapidated.

Further reading:
A Day in the Life of Ancient Rome: Daily Life, Mysteries, and Curiosities by Alberto Angela
Askdeb.com