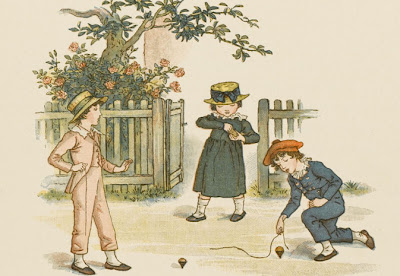 In the Victorian era, children, unless they were rich, didn’t have many toys to play with. A lot of them worked, but they still had time to play outdoors (their houses very too small and their families too big to allow them to play inside). They played simple games with whatever they could find and these games were usually accompanied by songs and rhymes. Here are a few of them:

HITTY-TITTY
Hitty-titty in-doors, Hitty-titty out; You touch Hitty-titty, And Hitty-titty will bite you.
These lines are said by children when one of them has hid herself. They then run away, and the one who is bitten (caught) becomes Hitty-titty, and hides in her turn.

DROP-CAP
In the game where the following lines are used, one person goes round inside a ring of children, clapping a cap between his hands. When he drops it at the foot of any one, that one leaves his position and gives chase, and is obliged to thread the very same course among the children till the first is caught. The first then stands with his back towards the centre of the ring, the one called out takes his place, and thus they continue till nearly all are “turned.”
My hand burns hot, hot, hot, And whoever I love best, I’ll drop this at his foot! 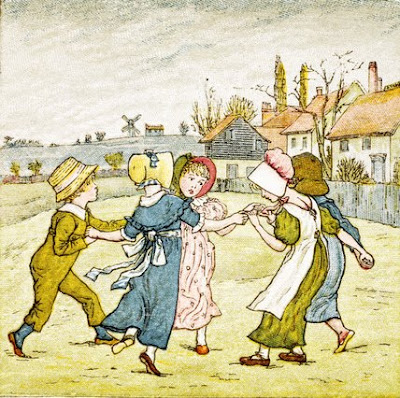 GAME OF THE CAT
This is another slate game, in which, by means of a tale and appropriate indications on the slate, a rude figure of a cat is delineated. It requires, however, some little ingenuity to accomplish it.
Tommy would once go to see his cousin Charles. [Here one draws T for Tommy, and C for Charles, forming the forehead, nose, and mouth of the cat.] But before he went, he would make walls to his house. [Here he draws lines from the arms of the T to its foot, forming the cheeks of the cat.] But then it smoked, and he would put chimneys to it. [Here he inserts two narrow triangles on each arm of the T, forming the ears of the cat.] But then it was so dark, he would put windows into it. [Here he draws a small circle under each arm of the T, forming the eyes.] Then to make it pretty, he would spread grass at the door. [Here he scratches lines at the foot of the T, representing the cat’s whiskers.] Then away he went on his journey, but after a little while, down he fell. [Here he draws down a line a little way from the foot of the T.] But he soon climbed up again. [Here he draws a zig-zag horizontally from the foot of the last line, and draws one up, forming with the last movement the first foot of the cat.] Then he walks along again, but soon falls down once more. [Here he draws a short horizontal line, and one downwards.] He soon, however, got up again, as before, &c. [The second leg is then formed, and by similar movements the four legs of the cat appear.] After thus falling down four times, Tommy determined to proceed more firmly, and climbing up, he walks along [the back of the cat] another way round till he comes to C. His journey is now accomplished, and an animal, called by courtesy a cat, appears on the slate, “the admiration of all beholders.” 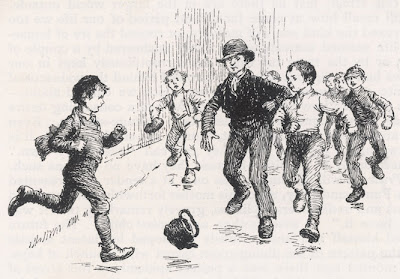 THE DIAMOND RING
Children sit in a ring or in a line, with their hands placed together palm to palm, and held straight, the little fingers downmost between the knees. One of them is then chosen to represent a servant, who takes a ring, or some other small article as a substitute, between her two palms, which are pressed flat together like those of the rest, and goes round the circle or line, placing her hands into the hands of every player, so that she is enabled to let the ring fall wherever she pleases without detection. After this, she returns to the first child she touched, and with her hands behind her exclaims,–
My lady’s lost her diamond ring: I pitch upon you to find it!
The child who is thus addressed must guess who has the ring, and the servant performs the same ceremony with each of the party. They who guess right, escape; but the rest forfeit. Should any one in the ring exclaim, “I have it,” she also forfeits; nor must the servant make known who has the ring, until all have guessed, under the same penalty. The forfeits are afterwards cried as usual.

Do you know any other Victorian children’s rhyming games?