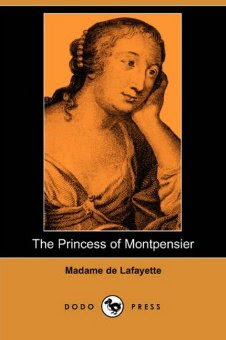 The Princess Of Montpensier is a short story written by Madame de Lafayette and published anonymously in 1662. It is the story of a young heiress of extraordinary beauty that makes everyone fall in love with her. But marriages were arranged at the time so she ends up marrying the Prince of Montpensier instead of her first love, the Duc De Guise. The Prince, though, is rarely at home. The story, in fact, takes place in the 16th century at the time of the Wars of Religion when the Kings of France were fighting the followers of Protestantism (in this case, the Huguenots). The historical events are, however, barely mentioned and mainly to explain why the Prince was always away from home to fight wars.

Despite being in love with another man and being often left home alone, the Princess at first vows to honour her marital vows and remain faithful to her husband. But when years later, she again meets her first lover and the two realize they still have feelings for each other, they embark on an affair (mind you, this is a story written in the 17th century so the affair is conducted mainly by letters and there are no intimate scenes between the two, not even a kiss), aided by the Comte De Chabaness, who acts as a messenger between the two. The poor Comte is the most sympathetic and interesting character in the story. A good friend of the Prince, he too is in love with the Princess who knows how he feels about her, yet, showing a complete disregard for his feelings, she still asks him to help her conduct her affair! He accepts but will end up paying a very high price for it.

As will the Princess. I don’t want to give away too much for those who aren’t familiar with the story but suffice it to say that the story is both a cautionary tale about what happens when a woman is forced to marry someone she doesn’t love and the dangers of having an extramarital affair. It’s a nice story but if you like books packed with actions or dialogs (or both), you won’t find it here. In fact, there is barely any action in the story, it’s mostly a recollection of a series of events. The style too, elaborate and typical of that time, can put modern readers off. I didn’t mind it though and I think the story, although nothing exceptional, is still good and a nice way to spend a hour.

Summary:
The Princess of Montpensier by Madame De Lafayette is a short story about a woman who, forced in an arranged marriage, decides to have an affair with her first love. However, don’t expect sex scenes or the classical happy ending with the two lovers running away in the sunset. It’s a story that warns women against the dangers of having an affair but it is also a reminder of what happens when they aren’t allowed to chose their husbands. The story is short, lacking in action and dialogue and written in an elaborate style but still enjoyable.