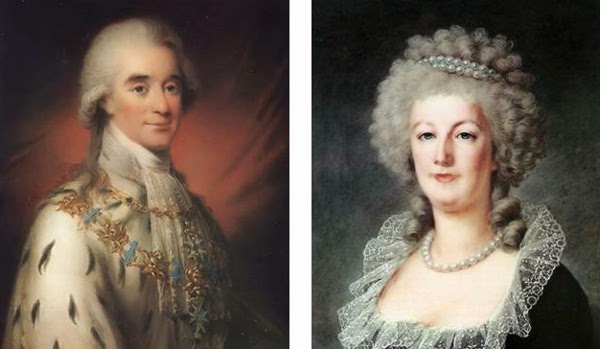 He was a skilled Swedish statesman and diplomat. A soldier in the War for the American Independence. A devoted and fervent royalist who faithfully served both the Kings of Sweden and France. An innocent victim murdered by a ferocious mob for a crime he hadn’t committed. Yet, to most people, Axel von Fersen is just Queen Marie Antoinette’s lover. Too bad he never was.

Yep, that’s right. There is absolutely no proof that Marie Antoinette and Fersen were lovers. Even historians like Antonia Fraser, who believes they were, had to admit in her biography of the Queen, that the evidence just isn’t there. Instead, everything we know about Marie Antoinette indicates that, regardless of what she may have felt for Fersen (and no one can truly say what is in someone’s heart), she was never unfaithful to her husband. 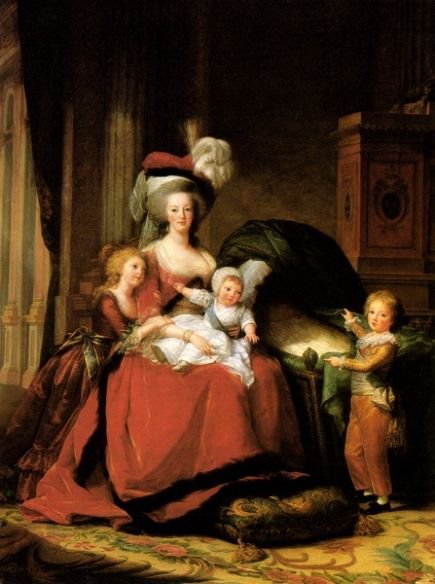 A chaste woman and a devoted mother

Few women in history were slandered as horribly as Marie Antoinette was. And yet, those who knew her well often commented on her chaste nature. She was so modest and prudish that she even wore a long flannel gown, buttoned from top to button, when having a bath! But the Queen wasn’t a saint. She was frivolous, squandered enormous sums at the gambling table, and loved balls. But her partying lifestyle, which never included lovers anyway, ended when she became a mother.

Marie Antoinette adored her children. She lived for them. She couldn’t bear even the thought of being separated from them. And that’s what would have happened if she had taken a lover. Although Louis XVI was no Harry VIII, adultery, when committed by a Queen, was treason in France too. If caught, Louis would have no choice but to divorce Marie Antoinette and banished her, probably to a convent. She would never have seen her children again. Marie Antoinette would never have taken that chance. Some suggested Louis knew about the affair and chose to ignore it, but that’s just not possible. Louis was a deeply religious man and wouldn’t have been able to just turn the other way. Not to mention that such an affair could have compromised the succession. He wouldn’t have allowed that. 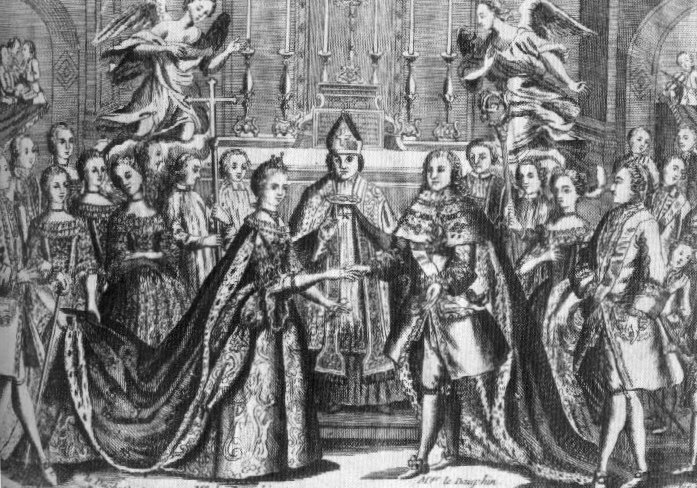 Marie Antoinette wasn’t devoted only to her children. She was devoted to her husband too. Although historians have often written off Louis XVI as an ugly, awkward and weak man no woman could possibly ever have found attractive, the King was a gentle man, a caring husband, a loving father, always striving to do his best for both his family and his people. All qualities that would inspire affection, loyalty, and love, if not passion, in any woman. Although the couple was pretty much estranged during the first years of their marriage, they eventually got close and grew to love each other. She certainly loved him enough to die with him. During the revolution, the Queen refused many plans to escape, either alone or with her children, and leave Louis behind, preferring to stay by his side till the bloody end. 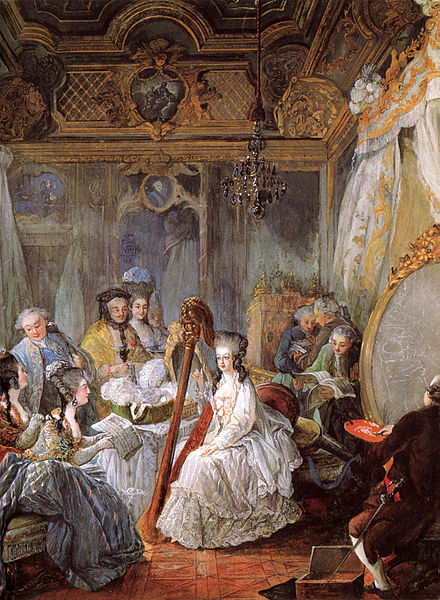 Even if Marie Antoinette had wanted, despite the possible horrible consequences, to have an affair, she didn’t have the means to do so. Queens of France lacked any privacy at all. They lived their entire lives in the public eye. Marie Antoinette was never alone. Even at her beloved Petit Trianon, where she was able to relax the strict etiquette rules that regulated life at Versailles, the Queen was never left on her own. Some family members, friends, or servants, were always with her. It would have been impossible for her to conduct an affair without anyone noticing or the help of one, or more, accomplices (which would have also increased the risk of discovery).

Not to mention that foreign ambassadors had spies at court who reported to them every move the Queen made. No aspect of her life was too trivial not to be commented on. They even checked the Queen’s bedsheets to know when she slept with her husband! The Austrian ambassador, who spied on behalf of Queen Marie Antoinette’s mother, the Empress Maria Theresa, never mentioned Fersen in his letters, something he would have certainly done if there had been even the slightest hint of scandal about them.

Even more ridiculous are the rumours that Marie Antoinette and Fersen had a last night of passion while she was imprisoned at the Tuileries Palace. Fersen, when writing about that night in his diary, allegedly jotted down “Reste là”, a term he used to indicate he had slept with a woman. But the phrase was erased from his diary, so no one knows for sure if that’s what he had really written. Even if he had, it is unlikely it meant anything more than he had spent the night at the Palace. Marie Antoinette was even more closely guarded than usual at this time. There is no way no one would have noticed the Queen having sex with her lover! Besides, Marie Antoinette was now fearing for her life, and the lives of her children and her husband. It is unlikely that she would have been in the right state of mind to entertain a lover. 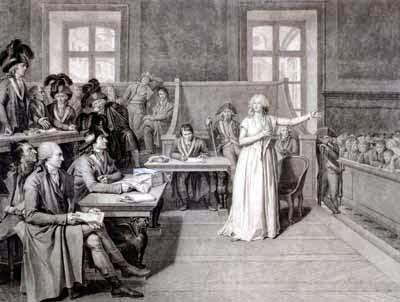 No mention at her trial

To me, the most convincing proof an affair never occurred was the fact that Fersen was mentioned at Marie Antoinette’s trial only for the role he had in the flight to Varennes. The revolutionaries hated Marie Antoinette. They accused her of sleeping with everyone she knew and even many she didn’t know, both male and female. They even accused her of having committed incest with her own son. Yet, they never accused her of having had an affair with Fersen, a foreigner and a devoted royalist who did everything he could to help the unfortunate French royal family. Why? Because no proof of their affair ever existed. If even the faintest hint of rumour had reached their ears, you can be sure they would have used it against her. 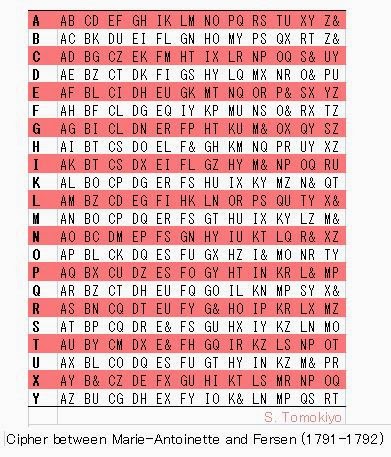 What about their letters?

The letters the Queen and Count Fersen wrote to each other have been perused by historians to find proof they had an affair. Although they don’t reveal any, people often find what they want to find. Every word and every cancellation has been carefully examined and attributed whatever meaning best suited the researcher’s hopes. So, even though the letters, which were written in a difficult cypher, showed their relationship to have been mainly a diplomatic one, many saw a lot more in them. Erased parts of the Queen’s letters have  been said to contain her declarations of love to Fersen, when it is far more likely they concealed Marie Antoinette’s disagreements with her brothers-in-law, or mentioned revolutionaries enemies or royalists friends. Leaving these references unblotted would have been too dangerous had the letters fallen into the wrong hands.

Some have also seen in the name Josephine, which Fersen used in some of his letters, an alias for Marie Antoinette. But Josephine was probably a maid working for his mistress Eleanor Sullivan, considering that in one of the letters, he gave her instructions about a stove. Antonia Fraser explains this discrepancy but saying that when Fersen talked about Josephine, he sometimes referred to Marie Antoinette, others to the maid. Needless to say, I don’t find it a very convincing explanation, especially because she doesn’t back it up with any proof. In any case, Eleanor is likely the woman Fersen passionately writes about in his letters to his sister Sophie. In those letters, he referred to her as “El” or “elle”. When talking about the Queen, instead, he always used “Elle”, with a capital E, so it is unlikely he was talking about the Queen in these letters. Especially, because the Queen, together with her family, was threatened by the revolution at this time, and would have had no time for love affairs.

Not every letter brought forth as proof has been authenticated either. In 1907, a certain Monsieur Lucien Maury published in Revue Bleue a fragment of a letter he claimed had been written by Marie Antoinette to Fersen. It said: “Farewell, the most loved and loving of men. I embrace you with my whole heart….” The letter, however, wasn’t in the Queen’s handwriting, but only in the cipher she used. The letter, could therefore, have been by anyone knowing the code. In any case, such effusive and exaggerated language was commonly used in letters written to friends at the time, and hardly proof of an extramarital affair. 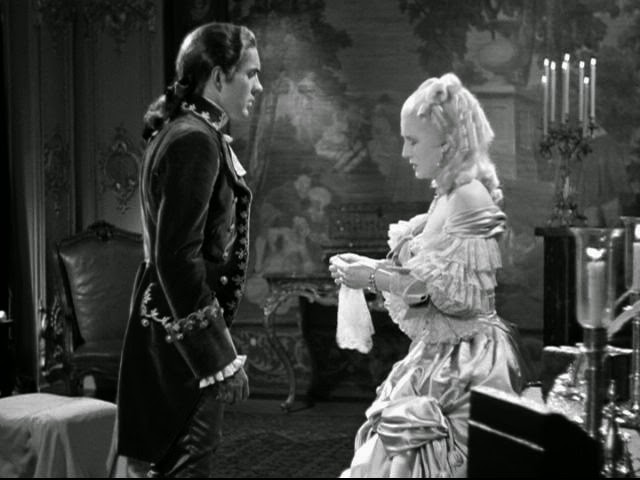 Why is this myth so popular then?

Scandal sells. Goodness doesn’t. Marie Antoinette wasn’t a remarkable woman. Despite being a Queen, her life was, overall, kind of boring. No wonder many writers and film makers have decided to spice things up with a little affair. That was done so many times that people started believing there must have been at least some truth in the rumours. And, of course, people are more prone to believe the worst, rather than the best, of people.

This myth also appeals to our romantic sensibilities. Marie Antoinette lived most of her life in the heap of luxuries, yet she knew little happiness. She left her family at a young age to marry a stranger, found life at Versailles, with its lack of privacy and scheming courtiers, unbearable, was slandered by her subject because of her foreign birth, imprisoned with her family, separated from them children, and eventually murdered. In an era where romantic love is considered a panacea for all evils, I believe many of us hope that Marie Antoinette had an affair so that, for a few moments at least, she knew the joys of passionate love.

Our society is also obsessed by sex. While no one has a problem believing that two people, who are not in love, can have sex for pleasure, few think it possible that two people in love would abstain from sexual intercourse. And yet, that’s something that happens more often than we think. Real love is not a tumble between the sheets, but unselfishness. An affair would have had devastating consequences for Marie Antoinette. If Fersen had really been in love with the Queen, that alone should have prevented him from touching her. But were Fersen and Marie Antoinette really in love? He was entirely devoted to her, and she surely cared for him, but what they truly felt for one another, only they knew.

I’ll end this post with the words of the Duchesse de FitzJames, a great-niece of Fersen:

I desire first of all to do away with the lying legend, based on a calumny, which distorted the relations between Marie-Antoinette and Fersen, relations consisting in absolute devotion, in complete abnegation on one side, and on the other in friendship, profound, trusting and grateful. People have wished to degrade to the vulgarities of a love novel, facts which were otherwise terrible, sentiments which were otherwise lofty.