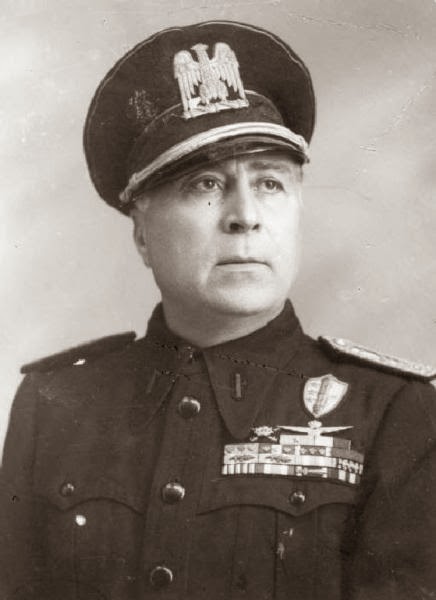 “We are a people of heroes”, said an once popular fascist song. The most prominent members of the fascist regime certainly liked to think of themselves as heroes, and they had the medals to prove it. Or not? Well, they definitely had the medals, but they usually weren’t honestly earned. Still, for some people, appearances were enough.

Mussolini was more than willing to award medals to his followers. His regime, he believed, needed heroes. But, at the same time, he asked the police to investigate each case. Here’s what they found out:

Italo Balbo, Blackshirt leader, Governor-General of Libya, and “heir apparent” to Mussolini
Balbo was put on trial for deserting his post and running away from the Moncalieri barracks (where he was attending a course to become a pilot), after the retreat at the Battle of Caporetto. He was absolved when he “proved” that he had run away, not to defect, but to reach the frontline to help fight the enemy. But the police, when asked by Mussolini to investigate, discovered that he had spent a few days hiding at his home in Ferrara. It was his father that forced him to go back. In addition, his promotion to captain for war merits was simply due to him forcing an Austrian official, who had been taken prisoner, to take his boots off!

Roberto Farinacci, Secretary of the Fascist Party
Farinacci lost an arm in Ethiopia. He claimed it happened while he was voluntarily teaching soldiers how to use hand grenades. One of those, apparently, exploded too soon. In reality, he was wounded while fishing with hand grenades. So, instead of the Military Order of Savoy, he was awarded a simple silver medal.

There were also those who refused some of the honours intended to be bestowed upon them:

Emilio De Bono, Governor of Libya
Everything in Tripoli, including streets, schools, and theaters was named after De Bono. Balbo believed that by erecting a monument to him, the names of the streets, etc, could be changed. Mussolini, though, warned him that erecting a monument for De Bono in Libya was ridiculous. Plus, he added, “De Bono doesn’t want to be honoured with a monument. He says it brings bad luck.”