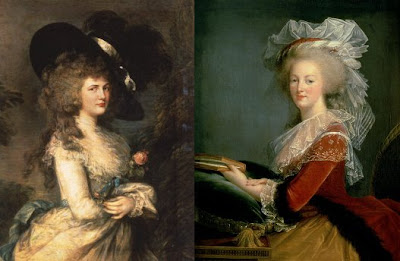 Marie Antoinette, Queen of France, and Georgiana Cavendish nee Spencer, Duchess of Devonshire were two of the most famous women of the 18th century. When the Duchess visited France and met the Queen, the two women discovered they had a lot in common and became life long friends. So, what are the similarities between them? 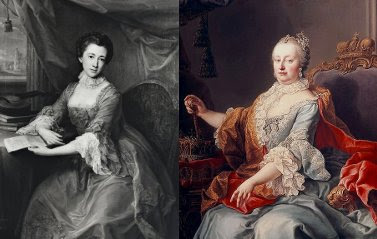 Overbearing mothers: both Countess Spencer and Empress Maria Theresa loved their daughters very much, but this love was very often suffocating. The two women were convinced they always knew what was best for their daughters and often sent them letters full of advices, instructions and reproaches. Can you imagine how these poor girls must have felt like every time they received a letter from their mums? Both wanted to please their parents, but this wasn’t always an easy task. They were put under a lot of pressure, resulting in an uneasiness in the relationship with their mums. Marie Antoinette in particular, was said to love her mother dearly but to also be in awe, and even sometimes scared, of her. 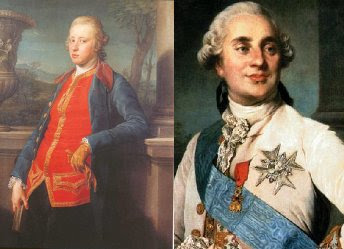 They married a position: Marie Antoinette’s marriage was arranged by her mother, Empress Maria Theresa, to solidify a political alliance between Austria and France. Georgiana, instead, was happy at the prospect of marrying the Duke of Devonshire but soon after the wedding she realised how cold her husband really was. Even though overtime the couples grew closer (Marie Antoinette refused to leave her husband during the French Revolution and William was said to be completely devastated when Georgiana died), both women were trapped in a loveless marriage. In addition, they hadn’t just married a man, they had a married a position and had to deal with all the expectations, restrictions and duties their status imposed upon them. Some people may have envied them for their positions and the privileges that came with them, but if they had looked more closely, they would have realised how deceiving appearances can be and that they didn’t have an easy life.. 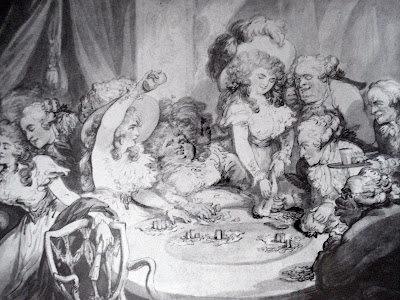 Love for gambling: both Marie Antoinette and Georgiana loved gambling. They would spend entire nights at the gaming table, gambling away enormous fortunes and piling up huge debts. Their husbands weren’t happy about it. The economical situation in France was disastrous and so Louis XVI forbade his wife from gambling. He granted her permission to play one last time, though, and the game went on for three days! Louis was disgusted. Georgiana instead, never stopped. She kept borrowing money from her friends (and never repayed them) to pay off her creditors, in the hope they wouldn’t demand money to the Duke. She was constantly on the verge on bankruptcy and feared her husband’s reaction should he find out the extent of her debts. Even when he came really close to demand a separation because of her debts, Georgiana wouldn’t neither tell him the exact amount of her debts, nor stop playing. 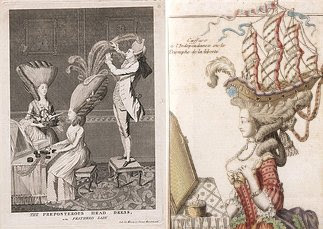 Queens of fashion: both women became fashion icons and trendsetters. Women would wait to see what clothes and hairstyles these two fashionable women, who had exquisite but also extravagant tastes, would wear so that they could imitate them. It was Georgiana who first wore big ostrich feathers on her hair and pretty soon, all the ladies followed suit, to some ridiculous extents at times. And when her painting by Gainsborurough (shown at the top of this post) was unveiled, women rushed to their milliners requesting their “picture hat”. As Queen of France, Marie Antoinette was required to wear elaborate court gowns, although she preferred to switch to simpler styles of clothing when possible (in any case, both got her in trouble). Her chief modist was Madame Bertin. The popularity of this talented modist really soared when she started designing clothes for the Queen. Marie Antoinette often gave her input on the gowns, suggesting alterations and proving she too had a talent for fashion. Her fashion choices often had a political message like the ship ornament she wore in her hair to show her support to the Americans revolutionaries. 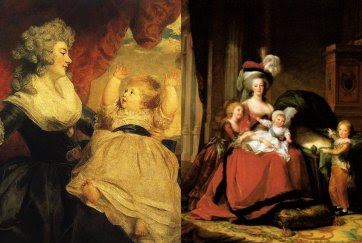 Affectionate mothers: both women were under great pressure to beget an heir but years would pass before they finally gave birth to their first children (Georgiana had trouble conceiving while Marie Antoinette and Louis XVI didn’t consummate their marriage for years). Marie Antoinette had lived a hectic lifestyle, staying up late every night dancing and gambling, but she settled down when she became a mother. The Queen of France lived only for her children and she personally saw to their education and upbringing. Georgiana too was a very affectionate mother who nursed her children and she even raised her husband’s illegittimate daughter. 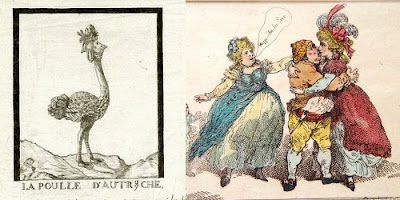 Victims of slanders: vicious pamphlets and gossips, all unfounded, circulated about both women. Marie Antoinette was accused of everything, including bankrupting France with her spending on clothes, exercising complete control over the king, having sex with anyone she met, both male and female, and even incest with her own son. This bad propaganda completely destroyed her reputation and eventually led her to the scaffold. Georgiana too was a celebrity of her own time, so papers and pamphleteers would often print malicious gossips about her. She was accused to kiss or bribe electors with favors and was made fun of for her hairstyles. 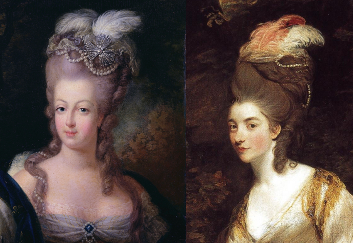 Charming women: the Queen of France and the Duchess of Devonshire were both pretty, charming and lively women who were always kind to everyone. And because of it, they were loved by everyone they met. Even those people who believed the calumnies circulating about these women and were determined to dislike them, ended up loving them once they met them. A man who was thus charmed by Marie Antoinette was Barnave, one of the three appointed to bring the royal family back to Paris from Varennes. During the trip, he started to feel sympathy for the Queen and became a supporter of the royal family. Unfortunately, this wasn’t enough to save them.

Wow, I knew Georgiana and Marie Antoinette had a lot in common, but I didn’t really realize how much until I started working on this post. New similarities between the two kept popping up as I was writing. What about you? Do you know of anything else that the Queen and the Duchess shared?