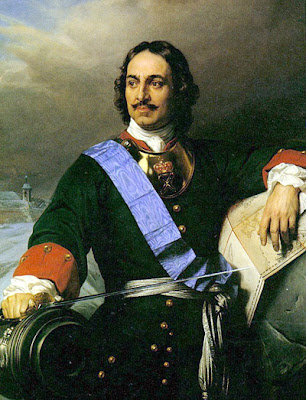 Peter The Great is one of the best known Russian Tsars. He ruled Russia from 1682 to his death in 1725. During his reign, Peter modernized Russia and transformed it into a major European country. But what did this remarkable ruler looked like? Filippo Baltari, a young Italian visitor to his court, described him thus:

“Tsar Petr Alekseevic was of great height, more thin than fat. he had thick, short, dark chestnut hair and big, black eyes with long eyelashes. His mouth was well formed, except for his lower lip. His face was handsome, inspiring respect at first glance. Given his great height, his legs seemed to me to be very thin. His head often jerked convulsively to the right.”

Peter was a giant, almost seven feet tall (or about 2 metres!), and a whole head taller than anyone else at court. However, it seems that his hands, feet and head were quite small for such a short man. Peter was also very strong and wasn’t afraid of physical labour. But he was also too fond of drinking and led an irregular lifestyle, which eventually weakened his body.

Further reading:
The Emperors and Empresses of Russia: Rediscovering the Romanovs by Donald J. Raleigh