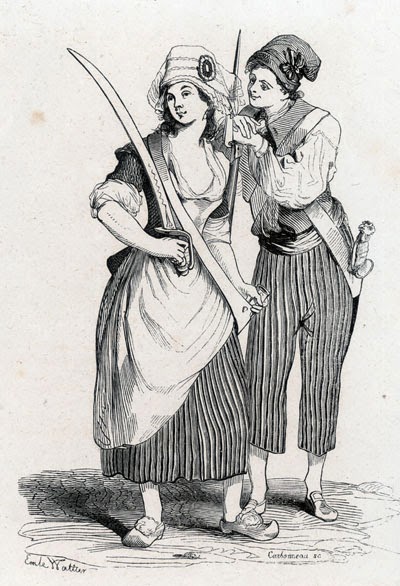 Lucy Moore, in her fascinating book Liberty: The Lives And Times Of Six Women In Revolutionary France, explains how fashions changed during the revolution. Clothes didn’t just get simpler. They also got coarser and dirtier. To quote:

From January 1792 fashion magazines had advised women to stop wearing conspicuous colours – even red, white and blue, however patriotic, drew too much attention to the wearer. By the winter, fashion magazine themselves were no longer being published. Women of all classes went hatless when they ventured on to the streets, wearing wooden clogs on their feet and shawls over their chemises: heavy rouge was their only concession to style. Lucy de la Tour du Pin’s former maid, in her spotless white apron, was drawn aside one day on the street by a cook who told her she would be arrested as an aristocrat for going out in such unpatriotically clean clothes; she was advised to wear coarse cloth instead.