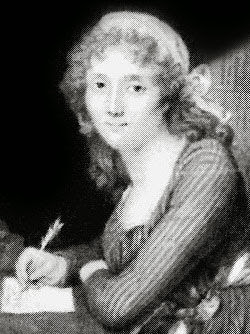 Although the French playwright and political activist Olympe De Gouges was a republican, she was against the execution of King Louis XVI, whom she saw as a victim. “The blood, even of the guilty, eternally defiles a revolution,” she said. “To kill a king, you need to do more than simply remove his head, for, in such circumstances, he will live a long time after his death; he would only be really dead if he were to survive his fall.”

However, this didn’t really go down well with the bloodthirsty Parisians. A mob with murderous intentions soon surrounded her lodgings. Olympe, instead than barricading herself inside, went downstairs to reason with them. When she appeared, the mob grabbed her by the waist and knocked off her signature white headdress.

From the hostile crowd, a man cried out: “Who’ll bid me 15 sous for the head of Olympe De Gouges?”. Undaunted, Olympe quickly replied, “I’ll bid you 30, and I demand first refusal”. The crowd was amused at her response, and, laughing, dispersed. But the Revolutionary government wasn’t as easy to pacify. Her attacks against the new republican regime landed her in jail and, in November 1793, she was guillotined.