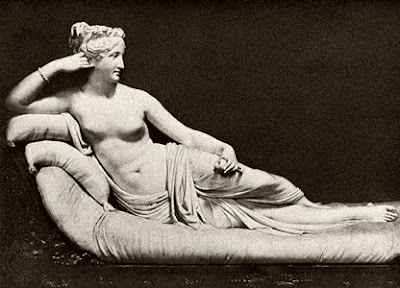 Pauline Bonaparte was considered one of the most beautiful women of her time, and she knew it. She loved to show off her body by wearing sheer dresses that didn’t leave much to the imagination but one thing she always kept covered, even when posing for paintings or sculptures such as the Venus Victrix statue shown above, was her ears. But why?

When Pauline was 19, she decided to attend a magnificent ball given by Madame Permon. All the fashionable world of Paris would be there and Pauline straight away decided she would outdo all the other female guests. Her costume was kept secret until she entered the room just at the moment when the music had stopped. All the assembled guests turned to look at her, and what a beautiful sight she was! Her muslin dress was bordered with golden palm leaves. On her head, she wore four leopard-skin patterned bands supported by little clusters of golden grapes. An engraved gem kept a golden band in its place just under her breasts and everywhere she was covered with cameos. Only her arms, wrists and hands were left bare. Pauline had succeeded in outdoing everyone.

This annoyed Madame de Contades, another guest and a woman of remarkable beauty too, who up until that point had enjoyed the attentions of both the men and women at the party. Now everyone deserted her in favour of Pauline and so she decided to get her revenge. She, too, approached the couch where Pauline was reclining and stared at her. Then, she turned to her escort of the evening and said, loud enough for everyone to hear: “What a pity! She really would be lovely if it weren’t for THAT!”. Everyone asked her what she was seeing in Pauline that was so ugly, but she just kept saying things such as “What a shame!” and “Surely, you must see that, it is so obvious!”. At this point, Pauline too started to get really worried and agitated. Finally, Madame de Contades revealed the little mystery. ““Why, her ears. If I had such ears as those I would cut them off!”, she said. Pauline covered her ears and fled.

From then on, Pauline would always hide her ears by wearing her hair low or a band. The irony is that there really wasn’t anything wrong with Pauline’s ears. They were small and flat, but they were nice-looking and not odd or deformed. It really is a shame that she let such a snide remark affect her so much.