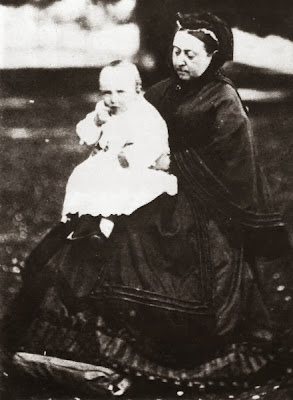 On 27 January 1859, Victoria, Princess Royal of Great Britain, gave birth to her first child, the future Wilhelm II of Germany. It was a traumatic breech birth that left the poor boy with a withered left arm. This injury would have a huge impact on the formation of his character.

Childbirths, back then, were dangerous affairs even when such complications didn’t arise, and a very worried Queen Victoria had recommended to her daughter the services of Dr Eduard Martin, the first German gynecologist to have used chloroform anesthesia on women in labour. She also sent Vicky her midwife, Mrs Innocent, her doctor, James Clark, and a bottle of chloroform, of which the Queen, who had given birth to nine children, was a big fan. Of course, Vicky had also other German doctors by her side.

Two days after the birth, Victoria’s husband Fritz wrote to his parents-in-law to give them an account of the event:

“After Vicky had been visited by pains of an unusual nature in the few days prior to the 27th, which had more than once given us a false alarm, she experienced sharp pains shortly before midnight on the 26th, and soon thereafter wetness, which induced me to call in Mrs Innocent. She soon informed me quietly that the time had come, but advised Vicky to try and get a little sleep.

This was no loner possible, as the above-mentioned pain recurred a short time later, & sir James was informed & Wegner and Countess Blucher summoned. Vicky put on some warm loose clothes and placed to and fro for several hours supported by Countesses Perponcher and Blucher and myself, desperately clutching us or at a table whenever the pain set in. At around 1/2 past 2 in the morning, I went to my parents to announce that it had begun, and Vicky went into the bedroom, which had meanwhile been prepared for the decisive event; & there, she spent the night either walking or lying in the chaise lounge.

The pains gradually increased, & by daybreak were no longer by any means negligible. At around 9 a.m., she lay down on the bed, the very place where my father was born; only somewhat later did Dr Wegner notice by chance as he examined her that the position of the baby was not quite the normal one.”

It was at this point that a footman was sent to fetch Dr Martin. He found the doctor just as he was about to leave to deliver a lecture. Dr Martin had actually been summoned with a note the night before but, because a palace servant had put it into a mailbox rather than have it directly delivered, the doctor didn’t receive it until 10:00. When the doctor finally arrived at the palace, the situation in the birthing room was tragic. The doctors were convinced that both mother and baby would die. In his “Report on the delivery of a child to Her Royal Highness, Princess Friedrich Wilhelm, Princess Royal of Great Britain”, the doctor wrote:

“At 10 1/2 I discovered the cervix to have dilated to around 1 1/2 inches; it was nonetheless taut. The right buttock of the child could be seen, the anus was pushed to the left and back. As the contractions were very painful and yet ineffective,… in other words they were being impeded by convulsions causing cramp-like pain, the patient, now in advanced labour, was given one grain of ipecacuana at 11. After vomiting once as a result, the contractions seemed to improve, although they were still decidedly painful; I therefore recommended moderate inhalations of chloroform, which also alleviated the Princess’s extreme agitation.”

“Vicky’s pain, as well as her horrible screams and wails, became even more severe; however, whenever she was granted a respite from her suffering, she would ask for forgiveness from everyone for her screaming and impatience, but she could not help herself. When the final stage of labour began, I had to try with all my might to hold her head in place, so that she would not strain her neck over much. Every contraction meant a real fight between her and me, and even today [29 January] my arms still feel quite weak.

To prevent her from gnashing and biting, we made sure that there was a handkerchief in her mouth at all times. Occasionally, I had to use all my strength to remove her fingers from her mouth, & also placed my own fingers in her mouth. With the strength of a giant, she was at times able to hold off 2 people, & thus the awful torture escalated until the moment of birth was so near that complete anesthesia with chloroform was undertaken… Vicky was laid at right angles on the bed; she let forth one horrible, long scream, & was then anesthetized.”

Because the contractions were not sufficiently strong, in the last stages of birth, Vicky was also given secale cornutum (or ergot). This made the contractions come less often and with less pain, “but were all the stronger and more expellent as a consequence”. Dr Martin, then, delivered the baby, as he described in his report:

“At 2.45 p.m. the buttocks emerged from the genitals, with the Prince’s legs thrust up over his abdomen and chest. As the pulse in the umbilical cord was now only weak and slow, indeed intermittent, a heavier dose of chloroform was administered in order to perform the operation that had now become necessary to ensure that the patient should be quite motionless and insensible during the final stage.

I carefully eased out the Prince’s legs from their upward-pointing position, and, as his life was seriously endangered, manouvred his [left] arm, which was thrust up behind his head, out of the birth canal in the accepted manner. The narrowness of the birth canal meant that this process involved considerable force.

By means of the same [arm], I then rotated the child’s trunk according to the established rules, thus freeing the right arm, which was also thrust up and back, and finally the head, following Smellie’s wise rule of rotating the face toward the mother’s sacral cavity and then carefully bringing it out. As the faltering pulse in the umbilical cord had already indicated when only his buttocks had protruded, the Prince was suffering to a high degree from foetal asphyxia.”

Martin then writes how “on administration of the usual means of revival he began to breathe”, but it was actually Fraulein Stahl who saved the Prince’s life. When the baby was born, he didn’t utter a sound, causing everyone to believe he was stillborn. Then, the midwife threw etiquette to the wind, and as she later recalled, took “the young Prince under my left arm” and “taking a wet towel in my right hand I began to apply the traditional method, although the doctors grumbled and everyone present in the room was shocked.” Then, she started slapping the Prince, “first softly, then more vigorously, slap, slap, slap,” until at last “a weak cry escaped his pale lips”.

“The sound cut through me like an electric shock,” later wrote the proud father. He then “staggered, in a half-faint, into the next room where the baby was in a bath, & first I fell into Mama’s arms, & then I sank to my knees.”