David Garrick was one of the most famous actors of his time. One of the roles that helped to establish his reputation was that of Richard III. His friend William Hogarth, a skilled portraitist as well as a witty satirist, painted him in the character of the last Plantagenet king. To be precise, the painting depicts the moment, on the eve of the Battle of Bosworth Field, when Richard wakes up, all shaken, from a dream in which he has seen the ghosts of the people he had murdered.

Give me another horse, —bind up my wounds, —
Have mercy, Jesu!—Soft; I did but dream.—
O coward conscience, how dost thou afflict me!—
The lights burn blue!—is it not dead midnight?
Cold, fearful drops hang on my trembling flesh.—

These are the words that Richard/Garrick utters just at this moment in the play. Hogarth skillfully captured the feelings of fear, concern, guilt and shock in his face and demeanor. Behind him stands a crucifix, next to which is placed his crown. His sword is unsheathed at his hand, while his armour lies on the floor. Richard will need them all for the battle ahead. The picture also has a moral message: all the riches and crowns in the world are worthless compared to an innocent conscience. They can not buy serenity, happiness and peace of mind. No matter how high a man may rise, if he has a guilty conscience, he will never rest. 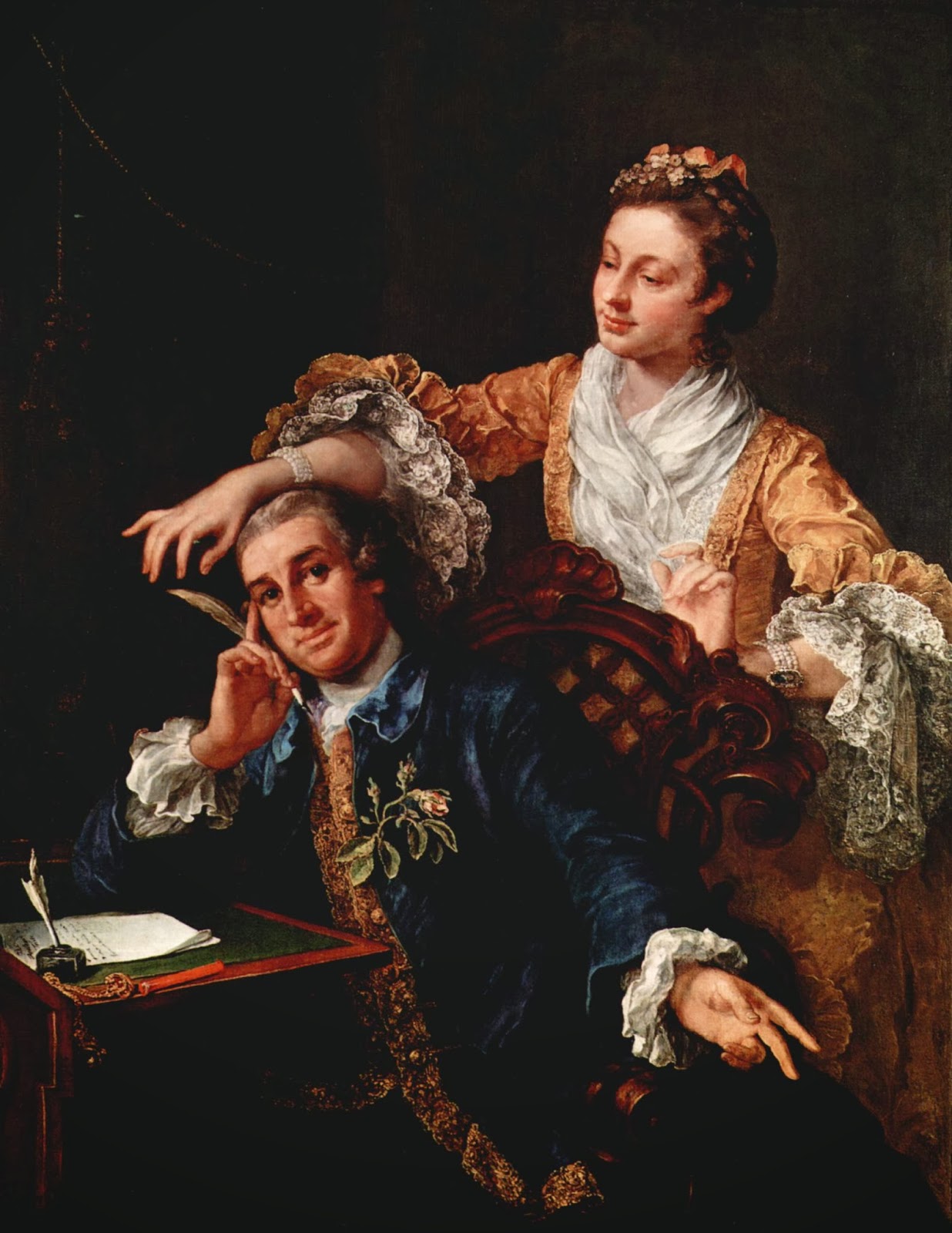 Hogarth also painted a portrait of Garrick with his wife. However, this time the two friends, as related in Hogarth’s London, quarreled:

“The portrait of Garrick writing the prologue to Foote’s comedy of Taste, with Mrs. Garrick behind him taking the pen from his hand, is interesting on account of the anecdote connected with it. The actor found fault with the picture. Hogarth, in a fit of irritation, drew his brush across the face of Garrick, and the picture remained in his possession till his death. Mrs. Hogarth sent the portrait to Garrick after the painter’s death. At Mrs. Garrick’s sale in 1823 the picture was bought by Mr. Edward Hawke Locker of Greenwich Hospital for 75, 11s. Mr. Locker sold it to George iv., and it is now at Windsor. Mr. Austin Dobson, who gives this account, quotes from Mr. F. G. Stephens (Grosvenor Gallery Catalogue, 1888) the corroboration of Hogarth’s supposed action: ‘The eyes of Garrick being coarsely painted, ill-drawn, and evidently by another hand than Hogarth’s, attest the truth of this story.’ It is related by Murphy that Hogarth saw Garrick in Richard III. on one night, and on the following night in Abel Drugger. He was so much struck that he said to the actor, ‘ You are in your element when you are begrimed with dirt or up to your elbows in blood.'”

Further reading:
Hogarth’s London by Henry B Wheatley
The Works of William Hogarth